History of the the Shrine of St. Joseph in Santa Cruz

Four Oblates of St. Joseph missionaries leave from Asti, Italy to minister to the Italian immigrants within the coal regions of the Diocese of Scranton, Pennsylvania. Within a short period of time they are entrusted with three parishes to administer in the Greater Pittston area of the diocese.

The Oblates of St. Joseph make the decision to expand their presence in the USA by accepting parishes and opening religious communities within the state of California.

The Oblates of St. Joseph arrive in the area of Fresno, California and are given a parish to administer in the town of Dos Palos.

Fr. Mario Buttini, O.S.J., superior of the California delegation, petitions Bishop Aloysius J. Willinger of the Diocese of Monterey-Fresno for permission to build a minor seminary and novitiate house in Santa Cruz. Permission is granted on May 24, 1949.

The Sullivan Family donates a large parcel of land to the Oblates of St. Joseph in Santa Cruz. Plans are made to begin construction of a chapel dedicated to St. Joseph on this gifted parcel of property. 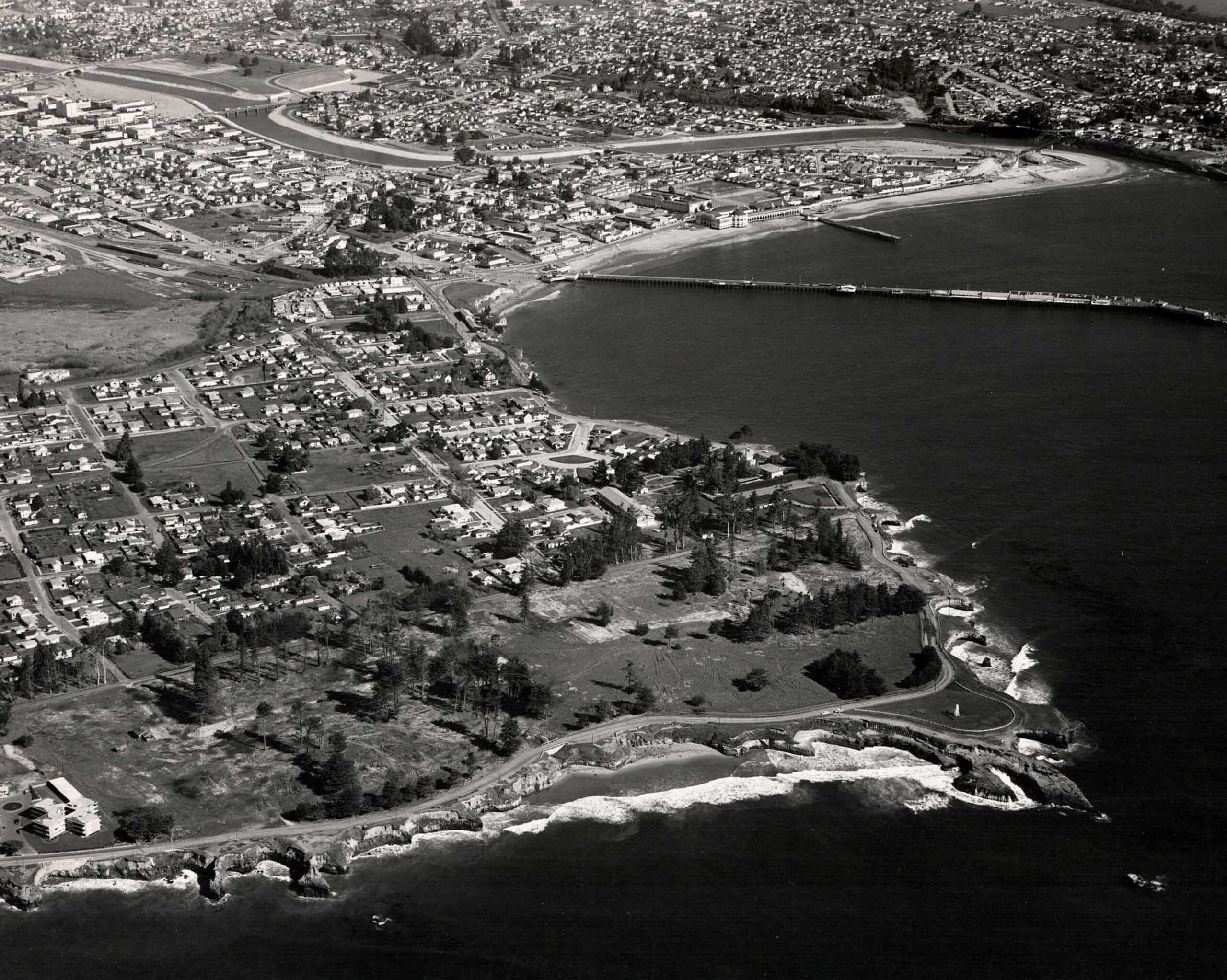 Permission is granted by the local bishop to build a seminary chapel in Santa Cruz. The chapel eventually expands into a house of worship welcoming the local faithful and visiting pilgrimage groups.

The Oblates of St. Joseph purchase the Villa Residence on West Cliff Drive, adjacent to the Victorian House, for housing increasing numbers within their religious community.

Ground breaking ceremonies are held to begin construction of the church. 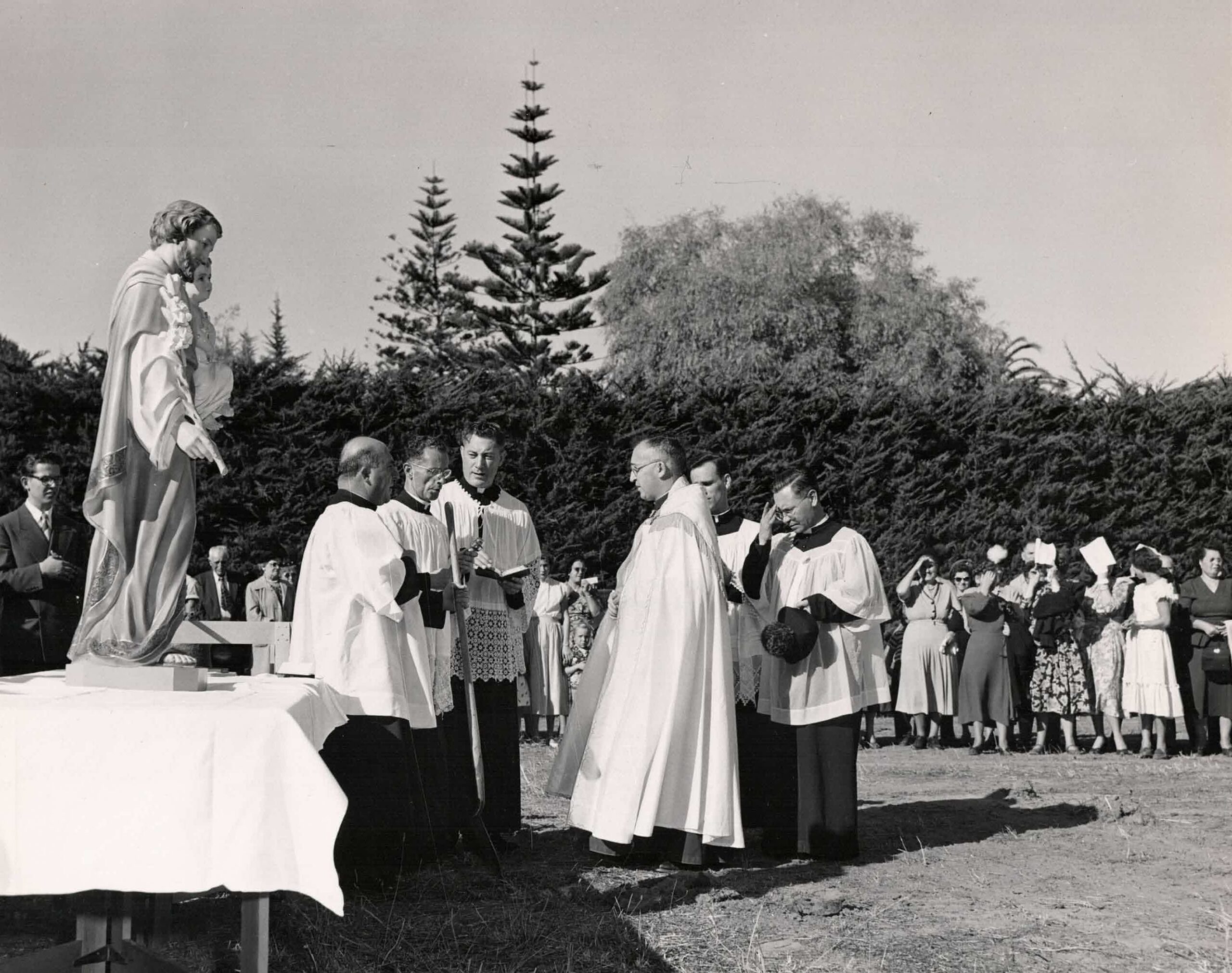 The groundbreaking and blessing to being the chapel for the Shrine of St. Joseph. The statue in this photo is currently in the Shrine lobby. 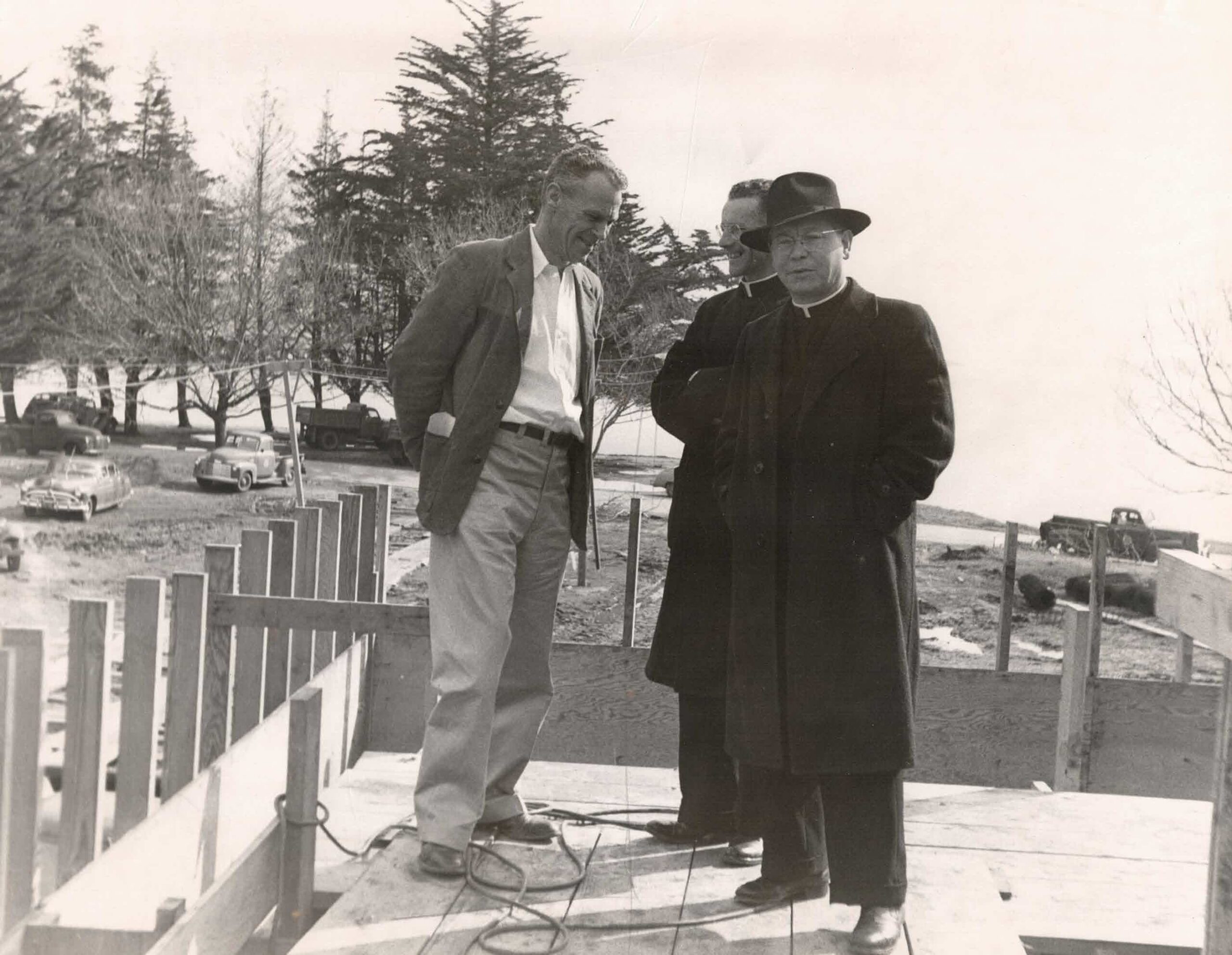 It’s coming together! Here key figures in the project of the chapel review progress. They are standing above the area that will become the arched entryway closest to the water. 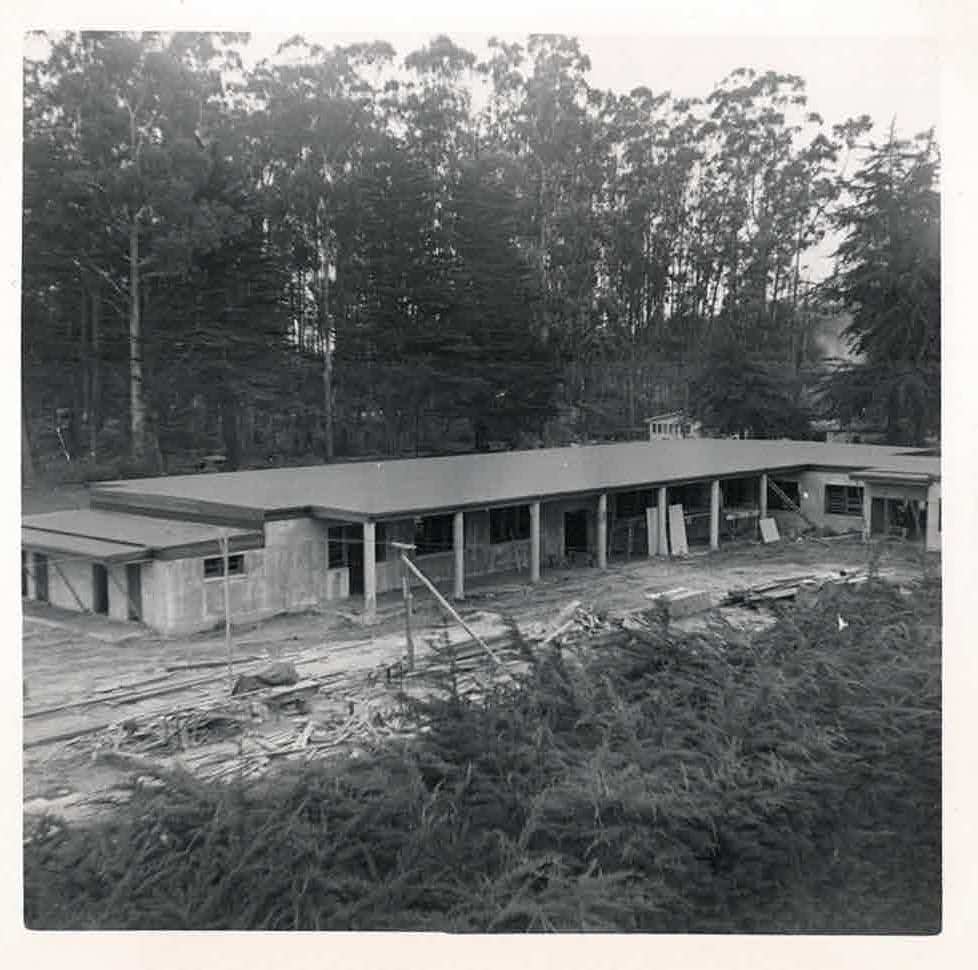 This original chapel had a flat roof. The construction site here is surrounded by cypress trees. 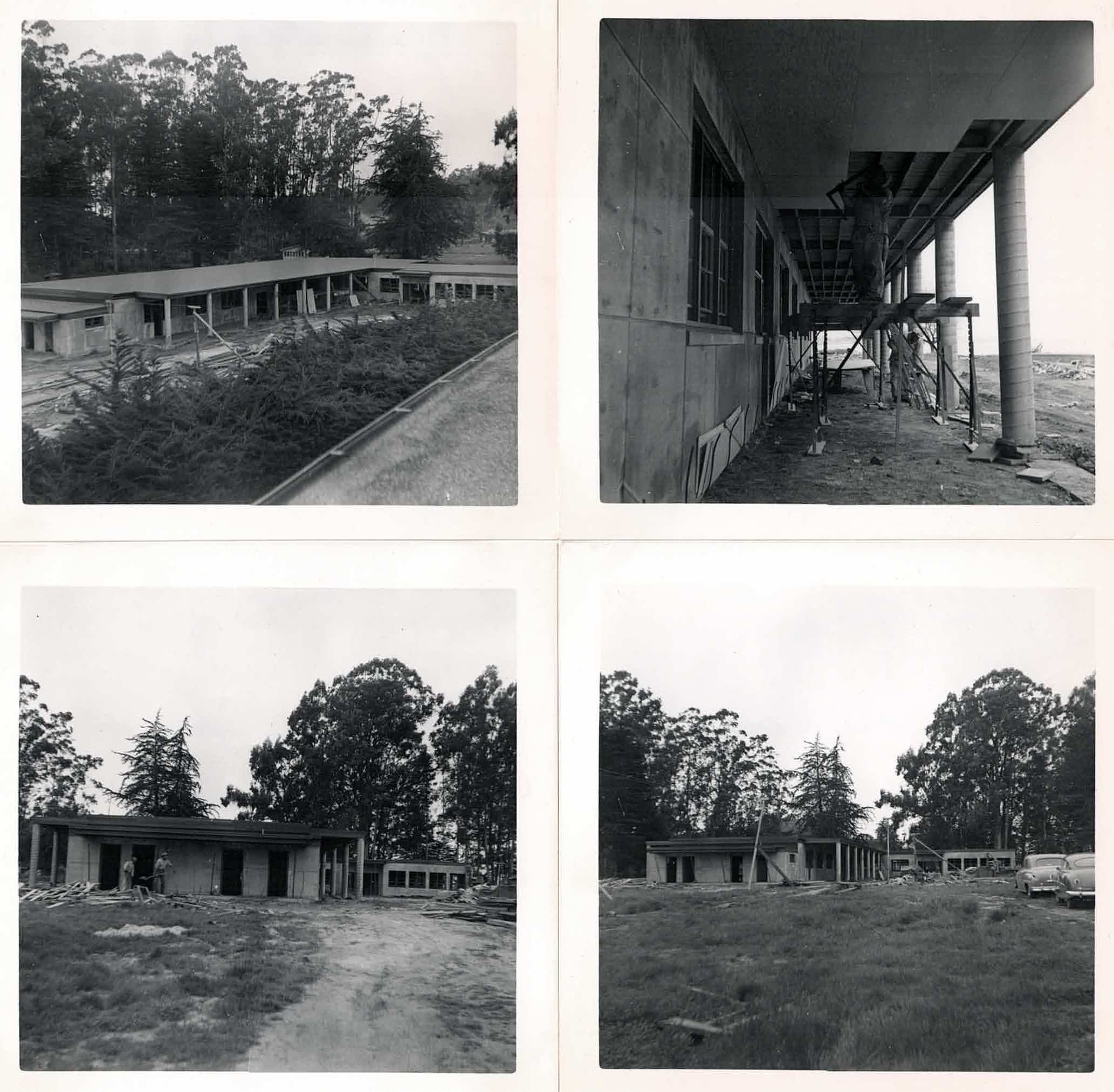 Here are several photos of our chapel under construction. 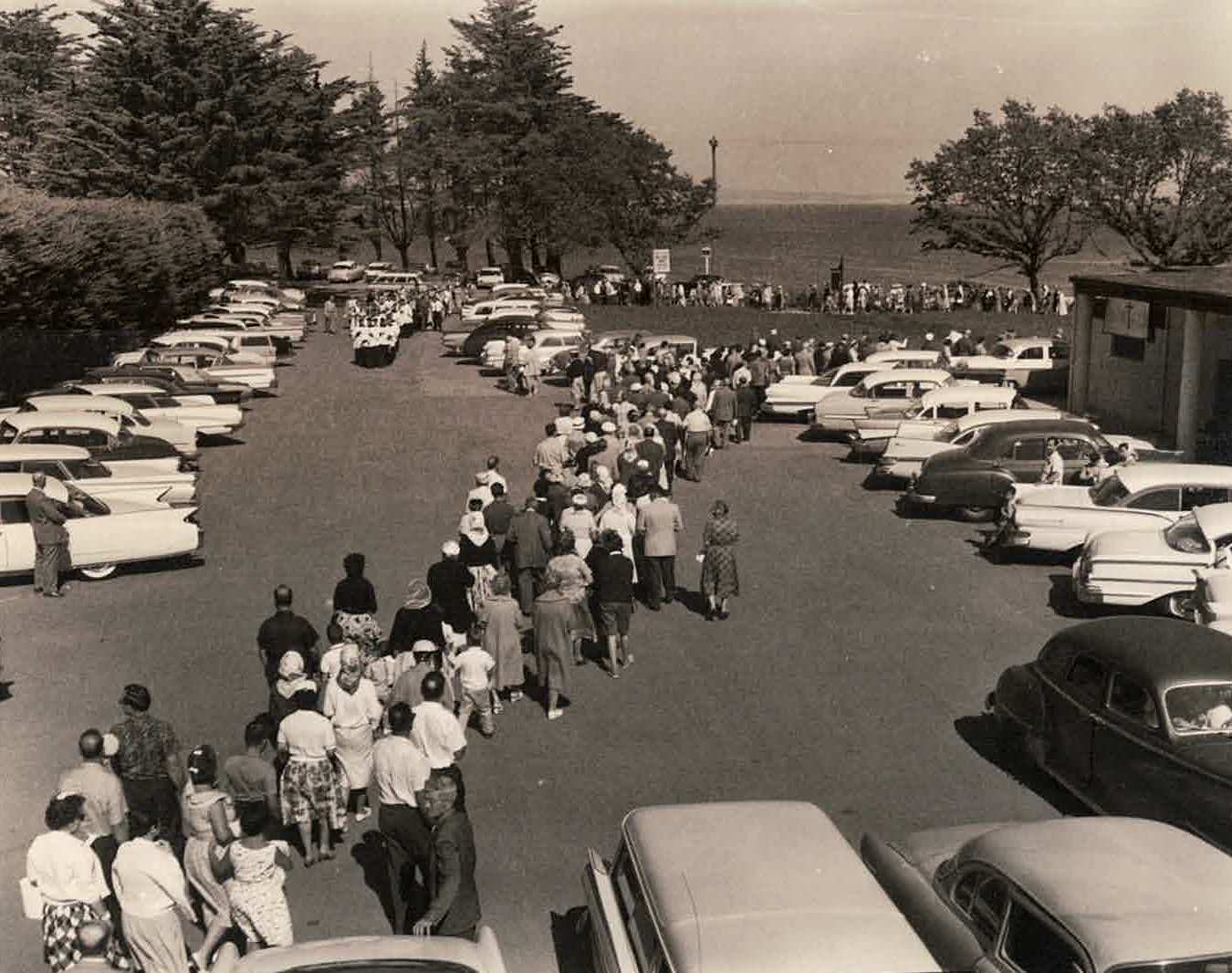 Now with the project complete, Catholics from throughout Santa Cruz gather to celebrate!

After extensive additional construction and renovations by then Oblate Provincial, Fr. Larry Toschi, O.S.J., the church is re-dedicated and proclaimed a diocesan shrine in honor of St. Joseph, Guardian of the Redeemer, by Most Reverend Sylvester D. Ryan, D.D., Bishop of Monterey.

Celebrating twenty-five years of abundant graces and blessings as a diocesan shrine dedicated to St. Joseph, a solemn Mass of Thanksgiving is celebrated by Retired Bishop Sylvester D. Ryan and Bishop Gerald E. Wilkerson, Apostolic Administrator of the Diocese
of Monterey.  Returning for the Anniversary Mass and serving as homilist was former shrine rector, Fr. Larry Toschi, O.S.J. Faithful from throughout the Oblate USA province participate in the joyous occasion.

A capital campaign drive is organized under the direction of current shrine director, Fr. Paul McDonnell, O.S.J. Plans are to completely transform the current Marello Conference Room into a state of the art coffee shop which will create a space for fellowship and evangelization to the general public. Campaign funds were also used to repaint the church interior, installation of new carpeting and marble flooring within the sanctuary area. A grand opening of the cafe, adjoining gift shop and administrative office is scheduled for late Fall 2019.

The striking victorian home on the Shrine campus was originally known as the Rutherglen Terrace and designed by Santa Cruz architect Edward L. Van Cleeck for James and Louise McNeil. McNeil was principal owner and president of Santa Cruz Electric Light and Power Works. According to the newspaper, Santa Cruz Surf, reporting on June 17, 1893, just shortly after the house was built: “the homelike colonial mansion with its delicate cream color, its broad veranda, its rounded corners and tower, and its steep hipped roof harmonizes admirably with the scene.” Monograms of Rutherglen Terrace, enclosed in a wreath of Scottish thistles, are engraved on the sidelights of the front door. 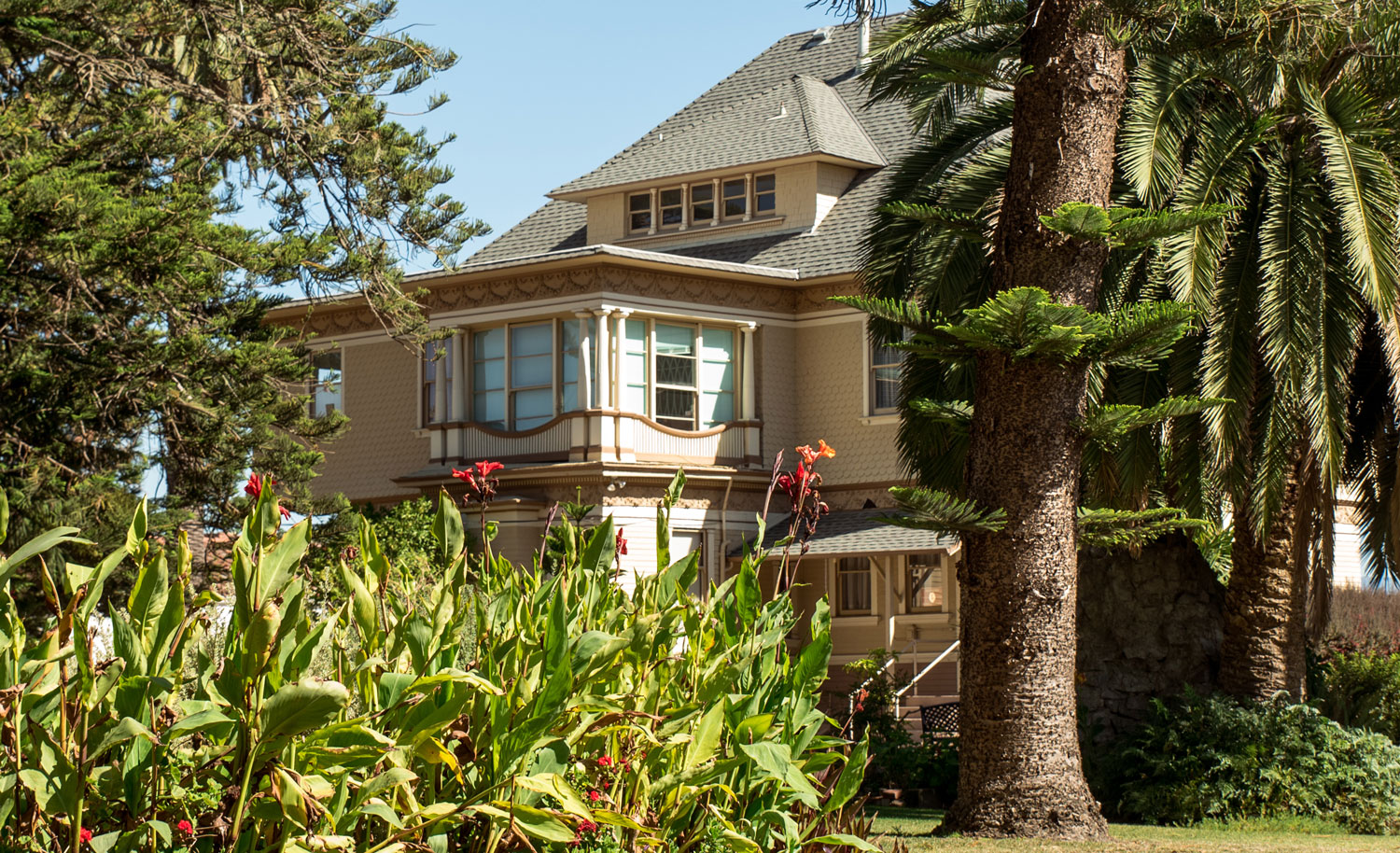 On January 6, 1933, the religious congregation of the Oblates of St. Joseph, in the persons of the late Rev. Emil Boccalatte, O.S.J. & Rev. Silvio Masante, OSJ, purchased the house and the 1.5 acres of property for $9,000.00. The last owner of the house before being purchased by the Oblates of St. Joseph was the famous actress, Lillian Blake. Various changes and upgrades were made to the house over these past 85 years but the breathtaking scene of Monterey Bay never changes. 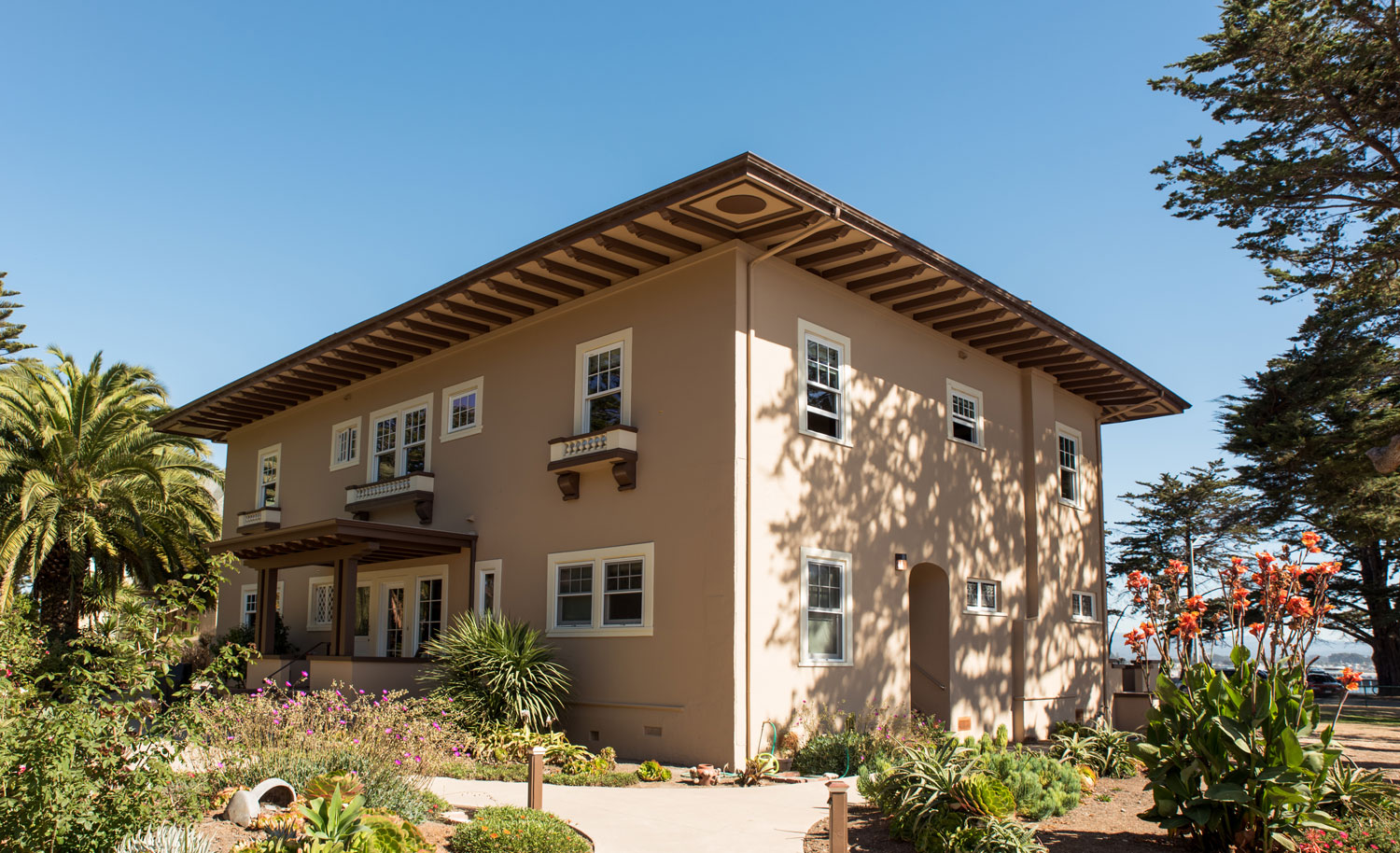 Built in 1912, this Prairie-Mediterranean style Davis house was designed by architect Chester Miller of Oakland, CA. Francis H. Davis and his brother, Frederick, were respectively, the plant manager and superintendent of the Santa Cruz Portland Cement Company plant at Davenport, just 10 miles north of Santa Cruz. At the time, Miller was the company’s architect. The brackets supporting the entry canopy are missing. 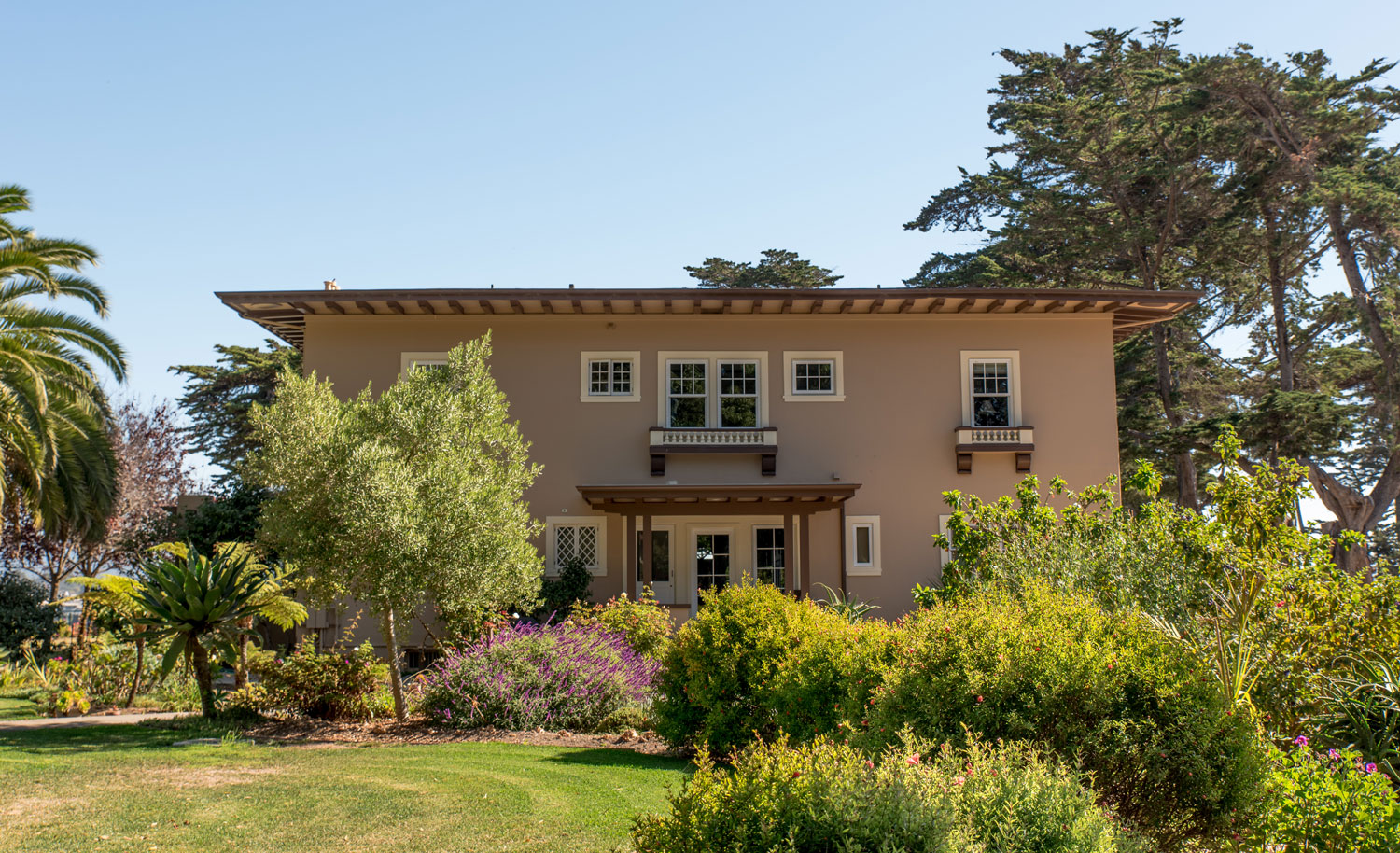 The residence was purchased by the Oblates of St. Joseph in the early 1940’s and has served the religious community for a multitude of priests and brothers throughout the decades. The house went through a major renovation from August 2014 – February 2015 under the direction of Fr. Paul McDonnell, O.S.J., provincial superior & shrine director from 2013-19; and, Larry Favor, General Contractor. 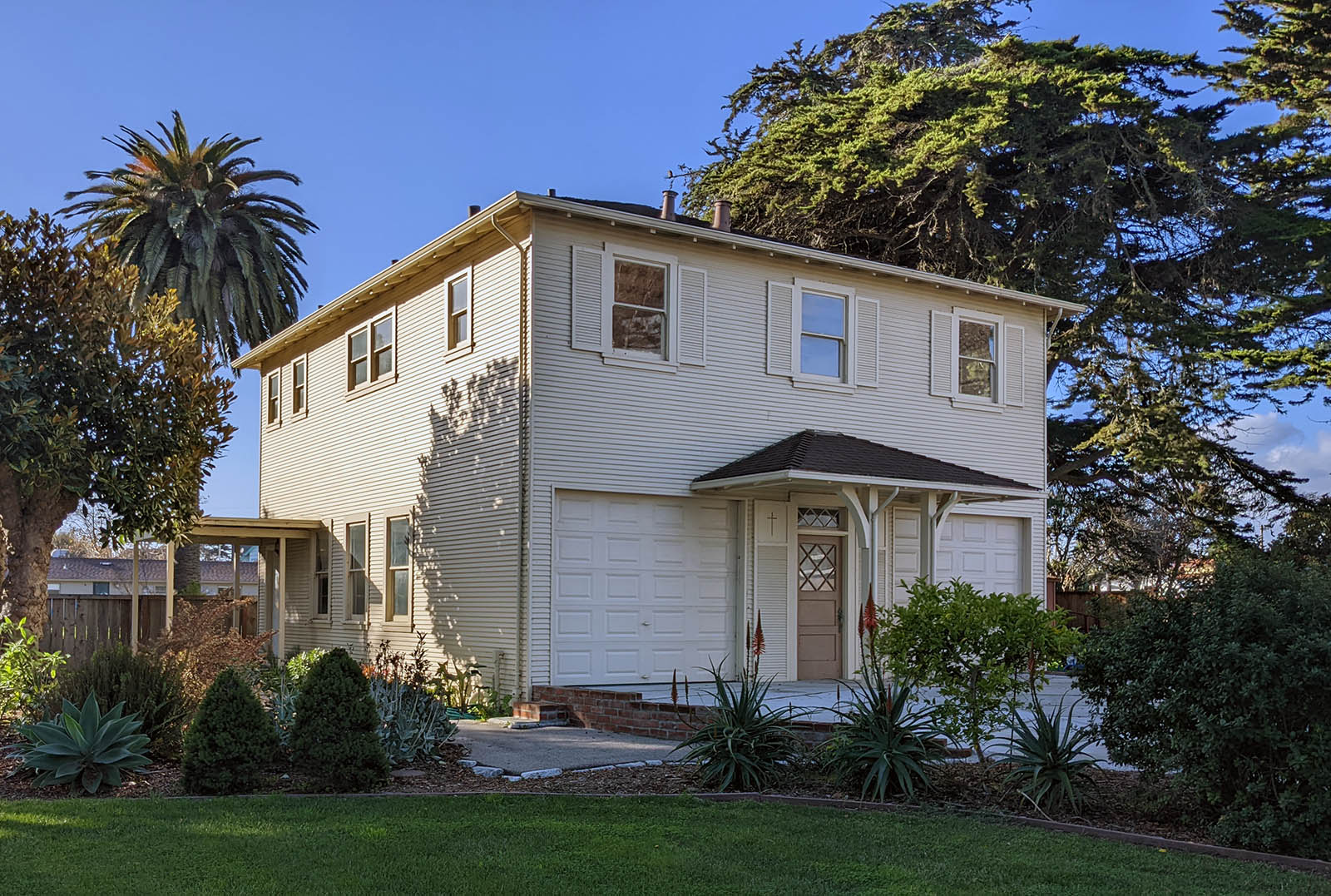 This campus structure is located behind the Victorian home, and currently serves as a storage area for the Shrine campus; as well as a small meeting room. Originally, it served as an extended residence to the Victorian when it was first constructed near the end of the 19th century.
When the property was purchased by the Oblates of St. Joseph it was eventually transformed into a dormitory for the novices and seminarians. By the mid-1960s the decision was made to move the novitiate house from Santa Cruz to Mount St. Joseph in Loomis (Diocese of Sacramento), where religious novices continue to reside today.

We are faithful to the Magisterium of the Catholic Church. Learn more about our Roman Catholic Diocese of Monterey.